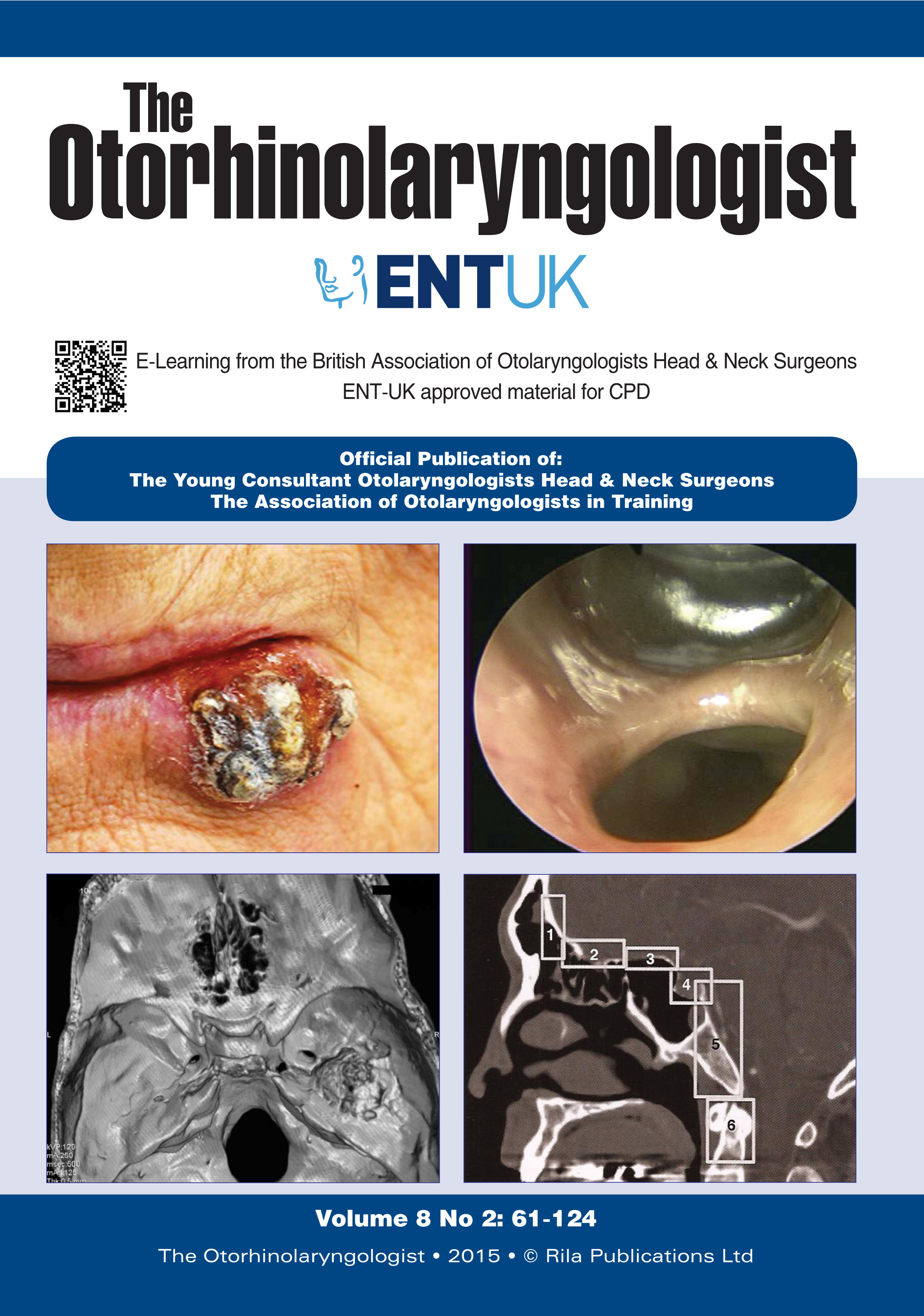 Welcome once again to the summer edition of The Otorhinolaryngologist. It has been an eventful summer already with a superbly organised BACO meeting in Liverpool, where it was so nice to see many people and also to see so many of our editorial board helping out in many ways. This is a clear demonstration of our dedication to the educational component that so many of us see as important in our jobs, despite local trusts not always agreeing with this. It was also, as ever, a great chance to catch up with old friends and make some more.

This edition of The Otorhinolaryngologist is packed with some fantastic articles that all of us can learn from and they take us to the cutting edge of what can be achieved by the humble ENT surgeon. I do hope you enjoy the edition and we look forward in the near future to allowing you to access The Otorhinolaryngologist via a web based app. Our ears are as ever open to ideas and suggestions and the editorial office’s email inbox is always welcoming of any submissions to the journal. I look forward to hearing any of your thoughts.

Objectives: Our objectives were to analyse outcome following a 6-week low-dose antibiotic course in children with recurrent acute otitis media (RAOM) and identify factors affecting response to treatment.
Methods: Children with RAOM were recruited prospectively between 2010 and 2012. Data collected included age of onset, passive smoking, attendance at day-care facilities, and response to treatment.
Results: Thirty-five patients were prescribed a 6-week course of oral antibiotics and the RAOM resolved in 28(80%) of these patients. The remaining 7(20%) did not respond and required VT insertion. Only 50% of children whose parents smoked responded to antibiotics.
Conclusions: A prolonged low-dose course of antibiotics remains effective in managing RAOM but appears to be less effective in children exposed to cigarette smoke.

Endoscopic Surgery of The Anterior Skull Base A Systematic Review: Part 1

Objective: To describe the evolution of extended endoscopic surgery of the skull base, with current and future applications.
Setting: Manchester Skull Base Unit, Salford Royal Hospital, Salford, Manchester, UK.
Methods: A literature search of Medline, EMBASE, CINAHL, AMED and the Cochrane Database of Systematic Reviews using the Ovid Collection was conducted to identify scientific publications using keywords including expanded endonasal approach, extended endoscopic endonasal approach, skull base surgery, and endoscopic skull base surgery. The period searched was 1948 to September 2013.
Results: 115 papers were identified. 48 Review articles, 26 case series and 41 technical notes were included for discussion.
Discussion: Evolution of endonasal endoscopic surgery in recent decades has produced a paradigm shift in the management of sinonasal and anterior skull base pathology. Burgeoning indications for the expanded endonasal approach to treat skull base and adjacent pathology has led to a rapid advancement in this field. Combined improvements in technology, such as intraoperative navigational systems, specialised instrumentation, compilation of endoscopic anatomical studies and surgical experience, have ratified change. In an increasing number of centres, it is considered the gold standard surgical approach, even for extensive pathology.
Conclusions: The frontiers of endoscopic transnasal surgery are ever expanding as new approaches emerge to manage ever more inaccessible lesions.

Endoscopic Surgery of the Anterior Skull Base: Part 2

Objective: To describe extended endoscopic surgical approaches to the skull base.
Setting: Manchester Skull Base Unit, Salford Royal Hospital, Salford, Manchester, UK.
Methods: A literature search of Medline, EMBASE, CINAHL, AMED and the Cochrane Database of Systematic Reviews using the Ovid Collection was conducted to identify scientific publications using keywords including expanded endonasal approach, extended endoscopic endonasal approach, skull base surgery, and endoscopic skull base surgery. The period searched was 1948 to July 2014.
Results: 307 papers were identified. 129 review articles, 71 case series and 107 technical notes were included for discussion.
Discussion: In Part 1 of this series we discussed the evolution of endonasal endoscopic surgery in recent decades, the anatomy of the skull base in both the sagittal and coronal planes, and the disease processes amenable to treatment by the endoscopic approach. This subsequent and final part of this series elaborates on investigation of skull base pathology with a view to endoscopic management, techniques of surgical management, reconstructive procedures, and benefits to the patient of the expanded endoscopic approach.
Conclusions: The frontiers of endoscopic transnasal surgery are ever expanding as new approaches emerge to manage ever more inaccessible lesions. There is still a learning curve to negotiate for experienced endoscopic skull base surgeons. We hope to contribute to this process by providing the reader with a clear understanding of the skull base, endoscopic anatomy and expanded endoscopic surgical approaches.

Lymphoma for the Head and Neck Surgeon

Nearly 14000 people are diagnosed with lymphoma every year in the UK. Lymphadenopathy is the reason for initial presentation in 90% of Hodgkin and 65% of Non-Hodgkin Lymphoma. Many of these patients will present to an Otorhinolaryngologist with a neck lump. This paper will review the literature regarding lymphoma and address some of the controversies surrounding its investigation and management.

Myringoplasty - a Review of Materials and Methods

Myringoplasty is the procedure for restoring the integrity of the tympanic membrane. This review article addresses the outcome of myringoplasty based on patient, disease and operative factors. Success rates for myringoplasty vary widely in the literature from 65 - 100%, with many authors advocating specific techniques to improve outcomes. We discuss the advantages and disadvantages of a range of surgical techniques and materials in regular use.

Background: Giant cell reparative granulomas (GCRG) are rare lesions, which uncommonly affect the temporal bone. GCRG can produce a range of symptoms including hearing loss, tinnitus, otalgia, facial weakness, otorrohea and a palpable mass. GCRG cannot be differentiated from Giant cell tumour of bone (GCTB) using imaging and these lesions exhibit histological similarity.
Case report: We report a case of a 41-year-old gentleman with right-sided hearing loss and otorrohea. Computerised Tomography imaging was suggestive of fibrous dysplasia, but MR imaging and further histology revealed a GCRG.
Conclusion: It is important to distinguish GCRG from GCTB, which carries a worse prognosis. Diagnosis is aided by the integration of clinical features, imaging and pathology.

A Rare Cause for the Presentation of Dysphagia

Dysphagia is a commonly encountered symptom in hospital Otolaryngology departments, often requiring further investigation and treatment. We report a cause of dysphagia not previously documented in the medical literature; new onset larygo-pharyngeal fistula felt to be a delayed complication of curative radiotherapy for a glottic carcinoma, thirteen years previously.

Inflammatory Pseudotumor; A case report and review of literature

Inflammatory pseudotumours are rare neoplasms of unknown aetiology. They often mimic malignancy, both clinically and radiologically, can be locally invasive, recur, metastasise and undergo malignant change. In this article we report a classical example of inflammatory pseudotumour with multiple foci, discuss the radiological and pathological findings and the management of the disease.

Describe what you see

This is a clinical photograph of a skin lesion. The lesion is nodular with well-defined rolled ‘pearly’ edges and central ulceration, which would be consistent with it being a basal cell carcinoma (BCC).

The Use of a Tongue Stabilising Device: An audit study of patient compliance, and effect on sleep quality

Snoring is a common presenting complaint to otorhinolaryngologists. NICE guidelines (May 2005)1 suggest radiofrequency ablation as a treatment for snoring, which is unavailable in some NHS trusts.
The oral device commonly used for problematic snoring is the Mandibular Advancement Device (MAD). Patient compliance and results with these devices vary.
A relatively new device, the Tongue Stabilising Device (TSD) is used in some centres/trusts. The objective was to audit against an identified compliance standard of 55%2 with the MAD for the TSD.
Patients referred to ENT outpatient clinic with problematic snoring and no OSA, who voluntarily accepted to use the TSD were invited to partake. The outcome measures were the Percentage compliance, and ESS and PSQI scores in compliant patients.