How close is that Carotid? A radiological study of carotid depth for peritonsillar abscess drainage 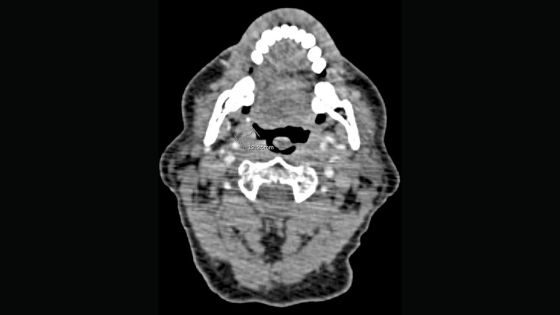 Introduction: Peritonsillar abscess is a common ENT emergency condition, usually requiring drainage along with antibiotic therapy. The treating doctor should be aware that a number of important structures are close to the peritonsillar space, including the External Carotid Artery (ECA), which may be injured during abscess drainage.

Patients and Methods: Axial head CT scans with intravenous contrast were assessed to measure depth of the ECA from the mucosal surface of the anterior tonsillar pillar.

Results: Mean depth of the ECA was found to be 16-17mm from the anterior tonsillar pillar in an adult population.

Conclusion: The depth of the ECA is smaller than previously thought and should be borne in mind when abscess drainage occurs.

More in this category: « A retrospective anatomical analysis of computed tomographic dacrocystographs (CTDCGS) performed prior to endonasal dacrocystorhinostomy for nasolacrimal obstruction Nasal Valve Surgery in Rhinoplasty »

Make sure you enter the (*) required information where indicated. HTML code is not allowed.